It is your responsibility as a freelancer to develop those skills and learn from failed projects. Failing is absolutely OK, provided you learn something from it. To help you learn without having to do all the dirty work, here are 5 common reasons for project failure: 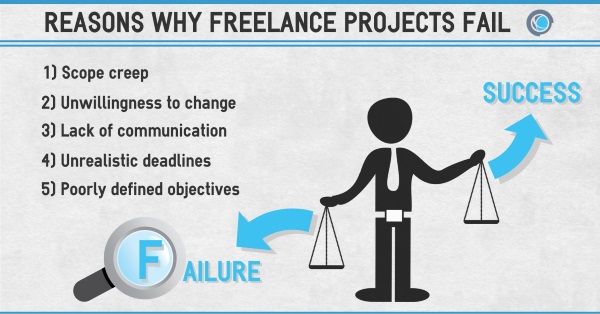 One of the biggest things to keep in mind for projects is that they change. Ideas, priorities and goals evolve. If these changes are not handled properly, the so-called scope creep can occur. When a project’s scope keeps growing or changing without control mechanisms in change, things tend to get out of hand. The best way to avoid scope creep is to make sure that the project budget, time and other resources adapt to the changes.
2) Unwillingness to change
Keeping our first point in mind, change in itself is not something bad. It will almost always happen and often must happen. The initial project draft shouldn’t be regarded as set in stone. Be willing to argue for changes that would improve the end product and also learn to accept such changes when the suggestions come from others.
3) Lack of client communication
Not communicating where the project is headed and how things are progressing is quite possibly the most common reason for a freelance project to fail. What this means for you as a freelancer, particularly, is that you shouldn’t hesitate to communicate any problems that might be occurring. If you feel like you won’t be able to finish your work on time, be honest with your client. Often, they will be happy to allocate more resources or extend the project deadline in order to get the quality they want.
4) Unrealistic deadlines
When a freelancer hears the words unrealistic deadlines, he or she mostly thinks about not being given enough time. And while that is a totally valid and often occurring issue, deadlines that are too long can be equally problematic as well. Breaking down the project into smaller parts by creating milestones, whether in cooperation with the client or just for yourself, is a great strategy to resolve that problem.
5) Poorly defined objectives
Last but not least, projects fail because it is not clear what they are supposed to accomplish. Most freelancers have at one point or another had clients that don’t really know what they want to achieve with a given project. This leads to constant changes in the nature of the task in itself, which can be really frustrating as good work goes to waste. Work together with your clients and help guide them towards good goals. A well-defined project objective is specific, attainable and measurable.
Have you been a part of a project that has failed? Tell us why you think that happened in the comment section below so your fellow freelancers don’t have to go through the same freelance mistake. Feedback is greatly appreciated!

Any cookies that may not be particularly necessary for the website to function and is used specifically to collect user personal data via analytics, ads, other embedded contents are termed as non-necessary cookies. It is mandatory to procure user consent prior to running these cookies on your website.