Emails often play a huge role in professional communication. A freelancer spends a lot of his daily time writing emails, but everybody is prone to mistakes. These can vary in effect – sometimes your messages will land directly in the spam folder, won’t be read or are not enticing enough to get an answer. Sounds familiar? 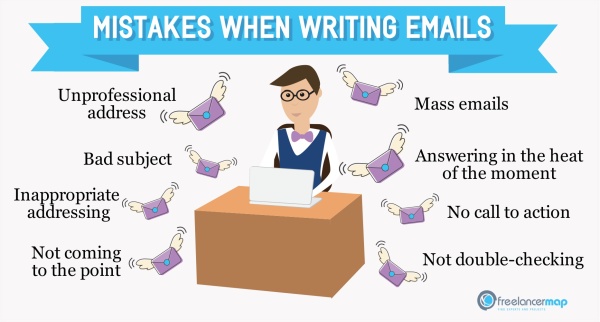 Here’s a list of the eight most common email mistakes that you should avoid at any cost:

It starts with the making of your email. Using an unprofessional alias from your teenage years is probably a bad idea. Everybody has those and maybe they were cool when you were 15, but this won’t necessarily appeal to a potential client. I had one myself, a rap song reference which got me into a couple of awkward situations before I finally got the heart to delete it.

Next up are bad subject lines. Either too long, too vague or just not saying anything at all. “Hello” is not a good subject line. Try expressing what you’re trying to accomplish with your email and keep it as short as you can otherwise it might not get opened at all.

Address people properly and respectfully, without using jargon, at least until you get to know them really good. If you’re not sure where you stand with a client after having exchanged a couple of emails, it is always helpful to see how they address you and stick to that.

4) Not coming to the point

Everybody spends a lot of time on emails but is aware that they could be doing other, probably more productive stuff in the meantime. So try not to waste anybody’s time – neither yours nor your emails recipient and get to the point, keeping it short and sweet.

Sending emails to dozens of people is one of the most surefire way to land in the spam folder. Other than that, it is impersonal and off-putting to the receivers. Sending single emails takes more time, but the success rate will be considerably higher so it’s worth the effort.

6) Answering in the heat of the moment

This mistake actually almost happened to me yesterday. A client wrote me that her colleagues would be unwilling to travel to a city for three hours to meet me, although the ride should only take one hour. I was close to asking her something to the effect of whether they were using Fred Flintstone’s vehicle. However, I took a deep breath, waited an hour and politely wrote her back, which in the end led to a mutually beneficial solution.

7) No call to action

When you write an email, chances are you are expecting an answer. Sometimes however your message might not really convey that. Make sure you include a question, or a so-called call to action, enticing your recipient to write you back.

Once you have gone through all the steps of writing an email, make sure you proof-read it. Spelling an email address wrong can be the worst, leaving you with the expectation of an answer that will never come. Leaving out an attachment is not irreparable, but annoying for both sides. Similarly, broken links or bad spelling is not the end of the world, but can often leave a bad impression.

Some people mark every second email as urgent. Or they will tell you that they need an answer ASAP. Don´t overdo it, because next time you will really need a quick answer nobody will take you seriously any more. So only mark emails as important when they really are.

Join our freelancer community today! Create your freelance profile in just 2 minutes.   Sign up for free

Can you think of other common email mistakes that a freelancer should look out for? Send us your tips or questions in the comment section below.